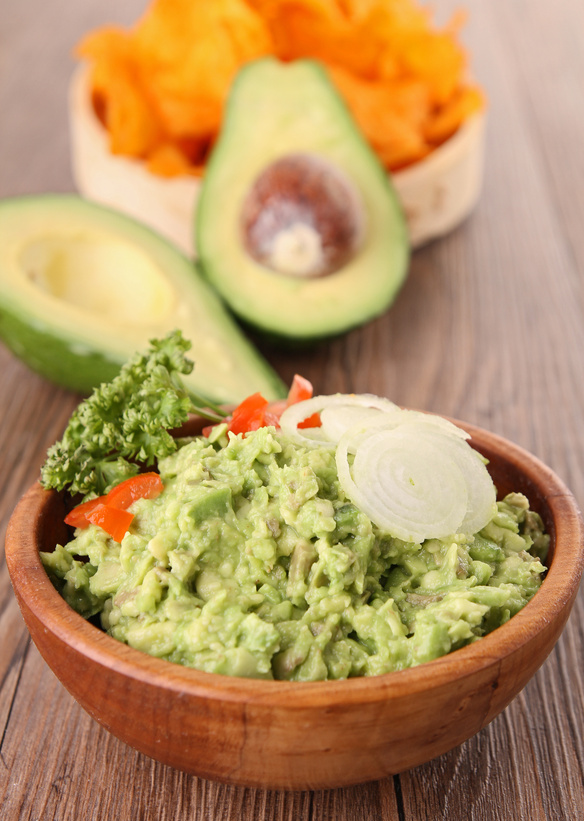 In addition to its use in modern Mexican cuisine it has also become part of American cuisine as a dip, condiment and salad ingredient. It is traditionally made by mashing ripe avocados with a molcajete, or mortar and pestle with sea salt. Some recipes call for tomato, onion, garlic, lemon juice, chili, yogurt, and often additional seasonings.

Did you know that guacamole dates back to the Aztecs? The Aztecs were particularly fond of ahuaca-mulli, or avocado-sauce, because of the high fat content of the fruit. Do not be afraid though. This is the good fat that you want incorporated into your diet. Later, the Spanish brought the wonderful concoction to the New World where it grew and flourished in popularity, becoming a staple in Central and South American cuisine.

Though most people are familiar with the guacamole that is popular in Mexico, there are actually different variations. For instance, Guasacaca is a Venezuelan avocado based sauce that is thinner and more acidic. It is made with vinegar, and is served over grilled food, arepas, empanadas and various other dishes. It is common to make the guasacaca with a little hot sauce instead of jalapeño, but like a more traditional guacamole, it is not usually served as a hot sauce.

Consumption of avocados has been increasing with all the major holidays over the past few years. One of the more surprising holidays seeing a spike in recipes with guacamole has been St. Patrick’s Day. Avocados are green, after all. In fact, an astounding 1.6 billion avocados were consumed in the United States in 2012 alone.

Did you know that avocados are a fruit? In spite of the fact that most people treat them like a vegetable, they are technically a fruit. No wonder recipes using guacamole with fruit such as peaches, mangoes, pomegranates or even pears works so well.

Hass is the most popular variety of avocado grown around the world. The Hass tree was discovered in the backyard of a mailman named Rudolph Hass in La Habra Heights, California in the 1930s. Hass knew a good thing and he patented his tree in 1935. All Hass trees can trace their lineage back to that tree. But the Hass avocado had to wait about 35 years before it really became popular in the 1970s.

Now that you know a bit more about what is guacamole, why not try looking up a recipe to make some of your own. Just make sure you have chips on hand. Helpful research also found here.